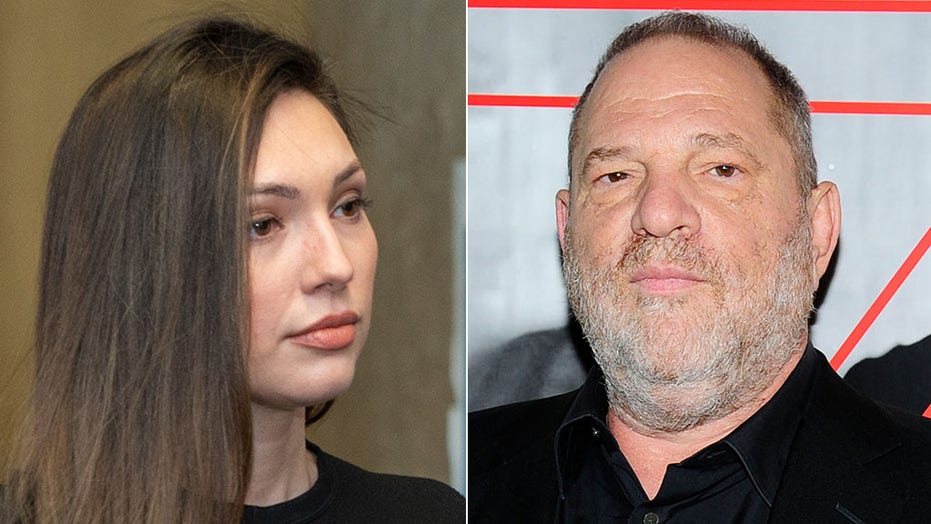 The latest statement in the Harvey Weinstein trial paints a rather disgusting picture in your head.

Jessica Mann testified in a Manhattan courtroom Friday that Harvey Weinstein engaged in forced oral sex and raped her in early 2013 and alleged that she was in a twisted relationship with him because of her sexual inexperience. As Mann tearily described alleged incidents, she also made the bombshell claim that Weinstein was “intersex,” saying he didn’t have testicles and appeared to have a vagina.

Weinstein faces charges in New York City for allegedly raping Mann, and for an alleged sexually assault on former actress Mimi Haleyi. Prosecutors have used Sopranos actress Annabella Sciorra’s allegation that Weinstein raped her around late 1993 to bolster their claim that Weinstein has a pattern of predatory behavior. “He would talk very dirty to me about fantasies and things, and compare me to the other things actresses that he said were doing kinky, dirty things with him,” Mann testified. “He always wanted to film me. I never gave him permission.”

“He would say, ‘Do you like my big, fat, Jewish dick?’” Mann claimed. “The first time I saw him fully naked,” she said, “I thought he was deformed and intersex. He has an extreme scarring that I didn’t know, maybe [he] was a burn victim …”

“He does not have testicles, and it appears that he has a vagina,” she claimed, saying she had oral sex with Weinstein. As Mann claimed that he had deformed genitals, Weinstein dropped his head. “He also peed on me once,” she said.

Prosecutor Joan Illuzzi asked Mann to describe Weinstein’s hygiene. “It was very bad,” she said. “He smelled like shit — excuse me, sorry, like poop. He just was dirty.”

Mann moved to Los Angeles with dreams of becoming an actress at age 25. She met Weinstein at a party around early 2013, introducing herself when she saw him talking to her roommate. Later that evening, Weinstein found Mann and got her phone number. Someone reached out and he took her to Book Soup, a bookstore on Sunset Boulevard.

“He had told me that it’s important for me to understand film history if I wanted to be an actress,” she said. “He wanted to give me some books on the film industry.”

They met there and he bought her four books and one was on Alfred Hitchcock, she said. She described him as normal and he was “very normal and very engaging.”

“There were a few moments where he made like a grunting sound, and he would look at me, but I didn’t know if it was a personality, or sort of an autistic-like trait,” she said.

At a subsequent meeting at a hotel bar, Weinstein claimed he was annoyed by people coming up to him, and asked the restaurant to bring their orders to his hotel suite. The staff brought everything upstairs, but “he was not interested in finishing our food.”

“He started to like, undress himself a little, but you know, I just thought he was just getting comfortable, but he continued, and he walked into his bedroom, and he wanted me to go in there, and I was hesitating and he said, ‘Let me give you a massage, take off your shirt … just relax.’”

“I was like no, that’s okay. I don’t want a massage and this went on for a good moment and um, he made me feel stupid, like, why did I think it was such a big deal, and he said, ‘Well if you’re not going to let me give you a massage, give me a massage,’” she alleged. “At that point, he had his shirt off and he had lotion. I started putting the lotion on his back … just like very awkwardly … with flat palm, stiff fingers, and smeared it around,” she said.

“He had a lot of alot of blackheads, and the texture of that was uncomfortable,” she also said. ,While Mann didn’t have sexual interest in him, Weinstein reached out to her and she did see him socially after the massage incident. At one party, Mann and Talita, an aspiring actress and her roommate, saw Weinstein; he asked to meet them in the hotel bar to talk about acting.

“It started with him saying I reminded him of his wife because I was clumsy, and she was clumsy, and he told me I was prettier than Natalie Portman,” she said. “He gave us criticism on both our images. He said that I needed to clear my skin up. He told Talita she needed to lose weight. He goes, ‘You guys are perfect for this film that I’m producing. It’s a vampire film, and you both made perfect leads.’”

The bar was closing and he urged them to join him upstairs. “I said, ‘Ha, ha, ha, oh no, I know what that means,” she recalled, saying that Weinstein laughed at her and responded, “I am a harmless old man.”Weinstein was pacing. Mann and her friend are sitting on the sofa and he walked back into his room, she said.

“He called my name,” she said, crying. Talita urged her to see what Weinstein wanted. “I leaned in and I said, ‘What do you want?’” she said. “And then he grabbed my arm, and he pulls me around, and as he’s pulling me around, he closes the door and he says to Talita, ‘We’ll just be a minute.’”

“I thought he was gonna hurt my father,” she said, explaining, “he said to me that he has guys with bats …”

Mann was in New York with a friend who was on a business trip not long after these alleged encounters. Mann, her friend, and Talita were going to meet with Weinstein at the Doubletree Hotel on 51st Street and Lexington Avenue for a breakfast meeting. Mann was staying with her friend at this hotel. When Mann got downstairs, Weinstein was checking into the hotel. She confronted him to ask what he was doing.

“He pulled me aside, to the corner, and he told me not to embarrass him,” she said. After Weinstein was checked in, he put his arm on her and started leading her upstairs. They started to argue in his room. He demanded that Mann get undressed. Mann tried to leave twice but he blocked the door, she alleged.