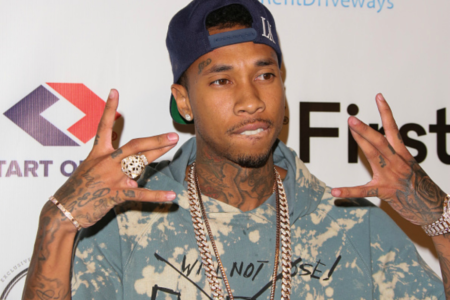 Tyga has just paid a pretty penny to start to clear out a debt, but he’s gonna need a few more coins to completely settle up.
Kylie Jenner’s boyfriend owed jeweler Jason of Beverly Hills $200,000 after a judgment was ruled against him. According to TMZ, the rapper has now paid half of that debt. His lawyers appeared in court on Nov. 1 to explain that Tyga is making good on the money owed and said that the entire debt will be settled by Nov. 17.

Tyga, who’s had money issues in the past, owned the jeweler the money from a 2013 transaction in which he purchased a chain and watch. Jason had reportedly tried tracking down the rapper with little luck. However, in August 2015, Tyga coughed up a huge settlement to an old landlord, whom he owed $480,000.

After that settlement, the jeweler went to court to try to get his money — he even hired the same lawyers that the landlord used.
In September, Kylie’s name was thrown into the conversation, as lawyers wanted to grill her about Tyga’s finances and the expensive gifts he had purchased for her, many of which have been documented on social media, including a $200,000 car. The reality TV star was actually subpoenaed and would have had to answer questions if her man did not begin to make amends with the jeweler.

The lawyers were set to privately meet with Kylie and Tyga, and if they had pulled a no-show, Jason’s legal team says they would have pushed to have them both arrested.

TMZ is reporting that Tyga footed the bill himself and had no help from his girlfriend or her famous family.
$100k down, $100k to go! Well, gotta start somewhere, right?