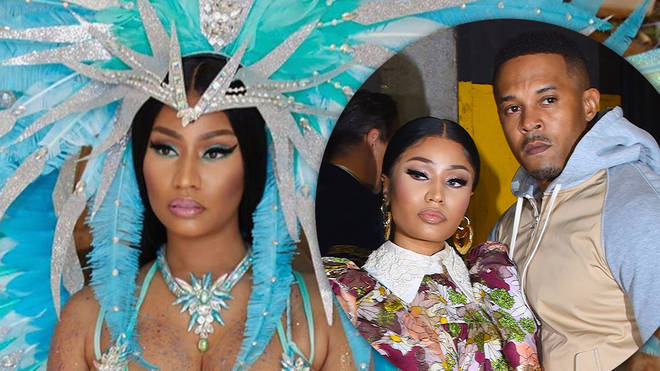 While still acknowleding it on more than one occasion, Nicki Minaj wants us to know she doesn’t care how much the internet and even her own fans seem to drag her husband.

According to Nicki Minaj could care less about think pieces on her husband, Kenneth Petty, and apparently, neither could he. The seasoned Femcee has been dealing with criticism against Kenneth ever since the two of them got together, and she’s just about had enough of it. Many take issue with their relationship and are not afraid to voice their disapproval, but Nicki has never let the noise drown out her love for her man, even recently telling the persistent haters to “suck a d*ck.”

Since the first initial glimpse of the couple, many questioned how the convicted rapist and murderer caught the eye of the multi-millionaire rapper despite having a rap sheet a mile long, but Minaj is on her full blown “us against the world” vibes.

This week, Nicki and Kenneth travelled to her home country of Trinidad for Carnival. Unfortunately, Kenneth (and Nicki, by association) were under fire after a video surfaced of him lightly pushing Carnival performer Iwer George’s arm off of his wife. Amid the backlash, Iwer clarified that it was no big deal and that Kenneth just wasn’t familiar with the closeness of Trini culture, and Nicki even apologized on her husband’s behalf. Now, she’s made a lengthier statement on Instagram to let everyone know that she and her husband remain ”
“unbothered” by all the negative attention.

“Rappers would kill for this attention chile,” Nicki wrote on a photo of herself and Kenneth posing at Carnival. “Lol at night when we go to bed I say ‘babe u was all over the blogs today.’ He be like ‘oh word?’ He rlly don’t have social media to see y’all write think pieces about him chile. AND AH LIKE IT LIKE IT LIKE THISSSSSSS. JUS LIKE THIS ‼️‼️‼️‼️” It looks like Kenneth isn’t even aware of all the criticism he and his wife receive, and the two of them are much happier this way, according to her.

It’s interesting that Minaj would think anyone would want this type of attention. Most rappers would release a hot single with a viral video or something to match…not marry Michael Myers. What do you guys think? Does the internet need to lay off Minaj and her husband or do people simply expect better for the ‘Chun-Li’ rapper despite her own controversial image?

Rappers would kill for this attention chile. Lol at night when we go to bed I say “babe u was all over the blogs today”. He be like “oh word?” 😂🤣 he rlly don’t have social media to see y’all write think pieces about him chile. ‼️♥️♥️♥️ AND AH LIKE IT LIKE IT LIKE THISSSSSSS. JUS LIKE THIS ‼️‼️‼️‼️🥰