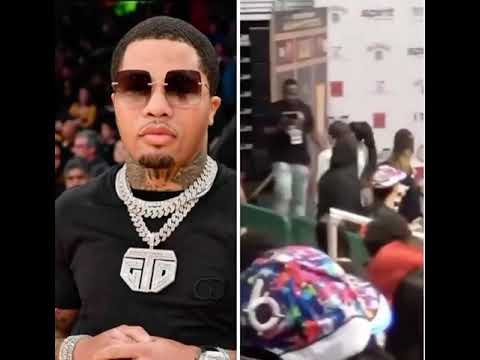 Gervonta Davis was seen grabbing out of an event.

In newly-surfaced footage, lightweight championship boxer Gervonta Davis was seen grabbing the mother of his child by her neck while at an event in Miami during the Super Bowl weekend.

TMZ reports that the moment captured on film spurred from an “argument” between the two while at a charity event in the city. Upon further inspection, the event in question appears to be the Boom Cups All-Star Celebrity Basketball Game which hosted the likes of Floyd Mayweather among its roster of players. The outlet adds that the event organizers are reportedly “extremely upset” with the athlete.

Soon Davis would take to his Instagram Stories to upload a response, attempting to justify his actions stating that he did not hit his baby’s mother, but admitted to being “Aggressive.”
“I never once hit her, yea I was aggressive and told her come on… that’s the mother of my child I would never hurt her other than that happy New Years.. January was trash.” While he did not address exactly why he was so upset, rumors have swirled that he was upset that Dretta was sitting with Floyd Mayweather’s TMT.

Around this time last year, a warrant for Davis’ arrest was issued by a Fairfax County magistrate in Virginia. It was in connection to a misdemeanor assault charge. Davis soon reached a settlement in the case, however, and the charges were dropped.