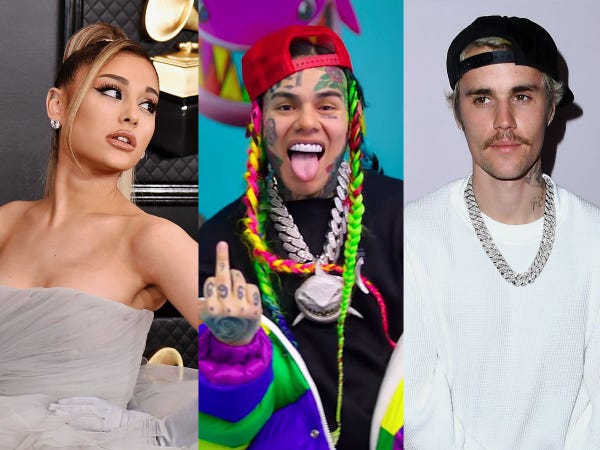 Tekashi 6ix9ine felt as though Ariana Grande and Justin Bieber were trying to pull a fast one with Billboard.

Tekashi 6ix9ine has been taking swipes at pretty well everyone as of late and the entire hip-hop world is watching with a rightfully judgmental eye. At this point, it feels as though no one is off-limits for 6ix9ine, even the popstars. For instance, 6ix9ine recently released a brand new single called “GOOBA” and his main goal was to get the song to number one on the Billboard charts. Throughout the last week, Tekashi has been keeping fans up to date on his progress and at one point, he took some shots at Ariana Grande and Justin Bieber as he claimed that they were manipulating the charts.

In fact, 6ix9ine was back to his old tricks yesterday, as he had even more harsh words for Billboard. None of his tactics worked, as eventually, the song landed at number 3 and Grande and Bieber took the top spot with “Stuck With U.” Following her big win, Grande took to Instagram with what could only be described as subliminal shots for 6ix9ine.

thank u to everybody who supported this song, this cause and made this happen. we love uuuuu so much. 🤍 there’s so much to celebrate today. 🤍 however, i would like to say a few things. anyone who knows me or has followed me for a while knows that numbers aren’t the driving force in anything i do. i’m grateful to sing. grateful to have people who want to listen. grateful to even be here at all. i didn’t have a number one for the first five years of my career and it didn’t upset me at all because from the bottom of my heart, music is everything to me. my fans are everything to me. i promise i couldn’t ask for another fucking thing. so with this celebration today, i would like to address a few things which i don’t usually do (i don’t give my energy to drama or strange accusations normally but this has gone a little too far)…my fans bought the song. JUSTIN’S fans bought the song. OUR fans bought this song (never more than four copies each, AS THE RULES STATE). they are ride or die motherfuckers and i thank god every day that i have them in my life. not just when they fight for us to win (even when i ask them not to as i did this week) but because they’re some of the greatest people i know. sales count for more than streams. u can not discredit this as hard as u try. to anybody that is displeased with their placement on the chart this week or who is spending their time racking their brain thinking of as many ways as they can to discredit hardworking women (and only the women for some reason…..), i ask u to take a moment to humble yourself. be grateful you’re even here. that people want to listen to u at all. it’s a blessed position to be in. i’ve had a lot of “almost number ones” in my career and i never said a goddamn thing because I FEEL GRATEFUL TO EVEN BE HERE. TO WANT TO BE HEARD AT ALL …. and you should feel that way too. congratulations to all my talented ass peers in the top ten this week. even number 3. 🥰 and thank u to @billboard for this honor. and thank u to everybody who helped us raise a lot of money for a very important cause this week. love u all a lot.

Considering Tekashi was the only one talking about his numbers this week, it’s pretty clear that Grande was talking about him. At this point, it really feels like Tekashi has upset the entire music industry, and not just hip-hop. While 6ix9ine’s taken aim at Ariana Grande, it’s actually a Justin Bieber song that she features on. Both Justin Bieber and Scooter Braun didn’t attack 6ix9ine necessarily but they did give him a little lesson on how the Billboard charts work.

“He says his streams don’t count. Yeus they do but he is counting his global streams and this is a domestic chart so only domestic streams count. 60,000 units came because we don’t disclose out numbers until the end of the week. That’s called strategy. He said 30k was bought with 6 credit cards but that is a lie. The rules are clear one credit card can buy max 4 copies. Anything over that the entire amount gets thrown out. Nielsen company checks this and found all sales were legit becuase our fans are amazing and bought them. Don’t discredit out fan base with false info. This is my song with Ariana Grande and I’m honored to work with her to help raise money for a great cause. If you gonna say her name make sure you say mine because it’s our song.”

Of course, it didn’t take too long for 6ix9ine to catch wind of the comments, though he simply trolled Biebs for essentially wanting credit for his song. Check out his comment and the post below. What do you guys think of all of this? Do you think there’s truth to what 6ix9ine is saying or is he just being a sore loser?