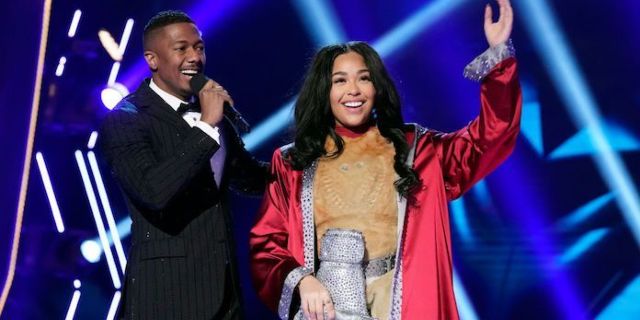 Jordyn Woods has decided to venture into the music scene after surprising many Kangaroo on The Masked Singer. The beauty of the odd-yet-enticing concept of The Masked Singer is that regardless of how certain the judges or the viewers are about who’s hiding underneath any given costume, more often than not, they’re proven wrong. Although most of the time, guesses will be in the same ballpark as the contestant’s true identity, nobody expected Ms. Jordyn Woods to be revealed as the Kangaroo during last week’s episode.

Though she certainly isn’t Whitney Houston or Mariah Carey, it was virtually unknown that Jordyn could sing at all. As a result, she’s continuing to capitalize on her new-found fame gained by losing her relationship with her best friend and has decided to pursue her “passion project”: record an album. “I have not been able to get to the studio. But as soon as everything clears up and we can leave again and I can get to the studio, that is as soon as you guys will get [an album],” she told ET. “Hopefully before the end of 2020. And I’m talking, like, as soon as possible.”

“I definitely don’t think people thought I could sing, but everyone has their opinion. Sometimes people [are] like, ‘What is her talent?’” she told PEOPLE. “You can be an influencer, I’ve filmed movies and I have my own businesses, but people are still like, ‘Okay, so what’s your talent?’ As if entrepreneurship isn’t enough. I wanted to show people a different side of me that even I didn’t know existed before doing the show.”

After quarantine is over, Jordyn plans to release music independently. “I’m going to most likely start my own label and be signed under myself rather than going to a label,” she said. She also credits her friend Jaden Smith for inspiring her to get into music. “Jaden’s been one of my biggest motivators from the beginning,” she said. “Last year, when I was just in the house, I started writing and teaching myself how to play the piano and he’s one of the first people that was like, ‘Jordyn, where’s the album?’ And this was before I even went on the show or anything.”

Take a look at some of what Woods has to offer with clips from The Masked Singer below. Will you be streaming Jordyn’s album in the future?