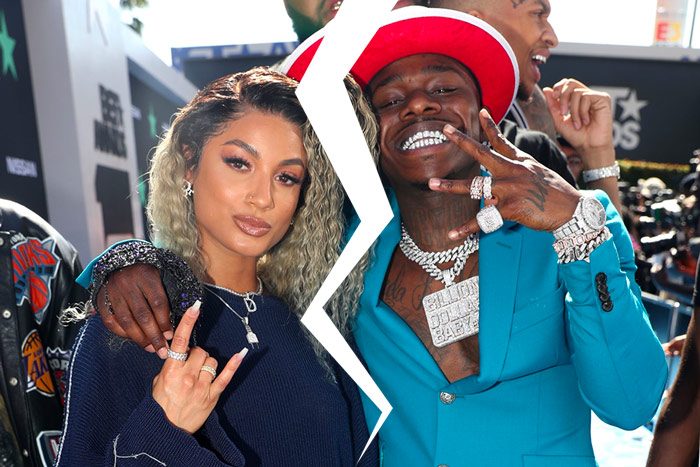 DaniLeigh has been going hard in the paint despite much backlash defending her situationship with DaBaby and now it seems a reality check may have at her fast.

DaniLeigh has been one of social media’s favorite punching bags the last couple of months. Whether she deserved it or not, is up for your own interpretation, but from her seemingly toxic love triangle with DaBaby and “DaBaby Mother” Meme, to the recent backlash she received after previewing her obvious tone deaf track “Yellow Bone,” in which she proclaimed with her whole chest that her man preferred women of a lighter complexion. Well, Dani may now have even more egg on her face with her latest post today.

It seems the on-again, off-again couple has called it quits again after less than a year together. DaniLeigh felt the public needed to know this information as she took to Instagram Stories on Sunday morning (Feb. 7) to announce that she was no longer in a relationship. “Officially single,” she simply wrote.

DaBaby has not acknowledged the breakup, but he did seemingly reference his single status by posting a TikTok video of model India Love acting out the lyrics to his song “Masterpiece” and asked fans to recreate it. The winner will be flown out for a Valentine’s Day date with the “Rockstar.”

Dani and Baby initially sparked romance rumors when they were seen spending time together during quarantine last year. In June, Dani shared a photo of herself in bed with a man that appeared to be DaBaby, and he even rapped about his “curly-haired jiggy bitch” on “GO” off his album Blame It on Baby.

In September, Dani hinted at a breakup following drama with Mimi, the mother of DaBaby’s daughter. “At the end of the day I’m human… that man was 100% single ‘to me’ when we started… I’m done talking about it tho I promise,” she wrote in a comment on The Shade Room. “Ready to get this money and drop this album. Good morning everyone and have a blessed day today.”

But they later got back together. In December, she posted PDA-filled pics on social media including one with her arms wrapped around her boyfriend. DaBaby wasn’t shy to flaunt their relationship, sharing video of Dani feeding him a lamb chop.

Since the breakup, Dani has removed all photos of her ex from Instagram. What do you guys think caused this split? Do you think it will be for good this time? Peep some of the reactions below:

Dani Leigh and DaBaby broke up 😂 I thought yellow bone is what he want boo? pic.twitter.com/1zNKnz3OJ9

DaBaby about to go right back to his baby mama bc that’s what niggas w/ bm’s do. DaniLeigh did all that foolishness for nothing lol

Danileigh hunny. I think everyone knew, but you. pic.twitter.com/4qNoeXVxkm

Comments: I thought yellow bone was what he.. 😂

Dani Leigh’s going out sad. She did all that nonsense and Da Baby turned around and embarrassed her just like the girls she thought she was better than ☹️🥴