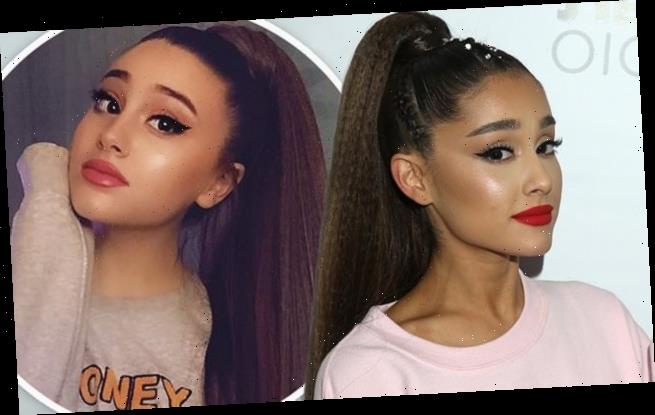 Ariana Grande’s ponytail may be just as famous as she is, at this point. The petite singer is known for her insanely oversized ponytail, that falls on her shoulders and down her back. She’s also known for playing the role of Cat Valentine on the TV show Victorious, as well as her penchant for wearing black eyeliner in a cat-eye shape. Combine all these aspects, and you have yourself the perfect Ariana Grande costume. It seems that these Ariana trademark looks have become so prevalent, that they’ve resulted in tons of copy-cats making TikTok videos in her likeness.

We’ve seen Ariana dopplegangers before, and Ariana didn’t necessarily seem like the biggest fan then– and apparently, she is not. She’s attempted to retract her statement– well, as much as you can ‘officially retract’ something once it’s on social media (meaning, she deleted the post), but, the internet never forgets.

In an Instagram Story that acted as a response to actor/writer Jordan Firstman, Ariana Grande responded to the many impersonations of her across the internet, calling them “degrading.”

Firstman’s original post was actually in response to viral impersonations in general:

Firstman went on to do a satirical impression of Grande. She replied in a now-deleted Story: “Omg can this please also double as your impression of the pony tail tik tok girls who think doing the cat valentine voice and that wearing winged eyeliner and a sweatshirt is doing a good impersonation of me … cause this really how it feels … ‘degrading it’s [sic] entire value’ I screamed.”

Some fans, in response to the fact that Ariana was offended, are offended themselves, thinking the former Nickelodeon star should be more grateful.

Check out Ariana’s message below, and let us know where you stand on the Great Ariana Grande Impression Debate.

I’m just here to entertain people? Bby girl that’s Ariana’s job. If your not a fan then take down the shrine in the back, and stop using Ariana’s personality and looks for profit on tik tok thank you! #ArianaGrandedeservesbetter #ArianaGrande pic.twitter.com/hja7sE1eFY