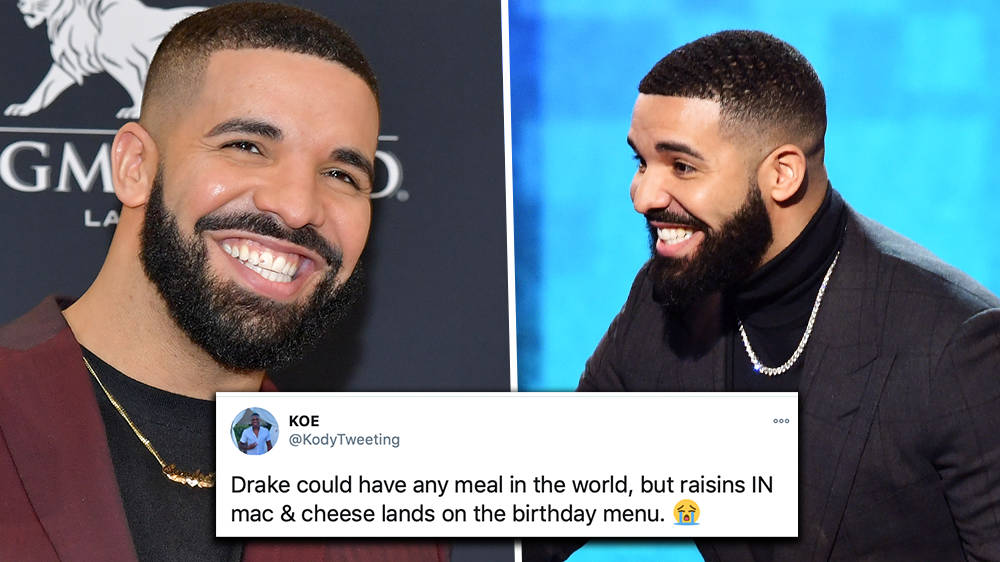 What’s likely (and hopefully) a typo in a leaked food menu from Drake’s birthday party sparks a few hilarious reactions.

Drake is officially 34. Many speculated that his birthday on Oct 24th would coincide with the release of his forthcoming project, Certified Lover Boy, though that was not the case– but we did get a release window for when to expect the album, at least.

According to Hollywood Life, Drake held a fancy bash for his birthday in Los Angeles on Friday, after flying out on Air Drake (his private plane, ICYMI) from Canada. From there, the rapper reportedly turned up in Las Vegas on his actual birthday.

Though a relatively low-key function, pictures did find their way onto the Internet filled with smiles, sparklers, cake, and bottles. As more pictures found their way onto the timeline, it was the food menu that caught many people’s attention. For the first course, there was a choice between fried calamari with a side of red sauce, a sushi platter, caesar salad, and baby kale salad. The second course, however, is what drew concern, specifically the mac ‘n’ cheese option. The menu option read that it included sun-dried tomato, caper, parsley, and raisins. It was the raisins that threw people off, obviously.

Chances are it was a typo because the grilled cauliflower option had the exact same ingredients but still, people ran with it.

Check out some of the best reactions below.

Drake could have any meal in the world, but raisins IN mac & cheese lands on the birthday menu. 😭 pic.twitter.com/7QNK1FpzTu

Drake out here having events serving Mac and cheese with capers and raisins……..I want 2020 burned to the ground

I know Drake did not have raisins in no damn Mac & Cheese. F**kin serial killer, that’s what he is. pic.twitter.com/mJPEHGbha1

.@drake did the mac and cheese have sun-dried tomato, capers and raisins or was there a mistake on the menu? We really need to know now. Also happy birthday pic.twitter.com/WqALRtzRS1

Also to those of you commenting asking "isn't Drake rich?" About that menu,

I can tell you with 1000% accuracy that celebrity and money doesn't correlate to an evolved palate.

Everyone's getting so mad about the raisin mac & cheese that they don't even see that the most offensive item on that menu is whatever chicken bolognese is. That's some kid's menu shit.

Things I believe to be true: