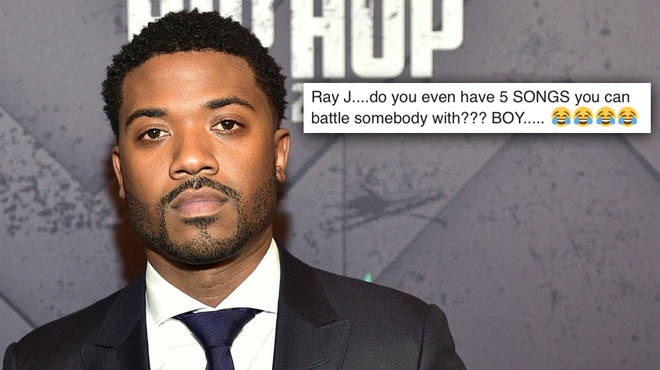 Ray J wants to face off in a “Verzuz” IG Live Battle, but music fans were quick to tease the singer-reality star on social media.

These Instagram Live Battles have everyone desiring a chance to show off their catalog. Sure, any two artists can decide to go head-to-head at any time to please their fans, but because Swizz Beatz and Timbaland have created Verzuz, many artists want their stamps of approval. We’ve watched friendly battles between Scott Storch and Mannie Fresh, T-Pain and Lil Jon, RZA and DJ Premier, The-Dream and Sean Garrett… and now Ray J wants his turn.

While Teddy Riley—who just faced off against Babyface in a battle between legends—was livestreaming, Ray J was spotted in the comments letting it be known that he’s ready. “Yo @timbaland I’m next up!! Who want the smoke?” The innocent request quickly circulated on social media, and since then, people have been weighing in with their opinions. Let’s just say, not everyone has been kind.

“Ray J wants to do an IG live battle, and I say let ’em. He can play ‘Wait A Minute’ and clear the place out,” one Twitter user wrote. Another added, “Not everybody that’s in the music scene deserve a battle. Im not trying to see a Ray J, Romeo, Bow Wow, Lil Salt Shaker, mixed paprika smoke or emcee basura go beat for beat or bar for bar. Let’s cut the bulls**t people. 😂🤷🏿‍♂️.”

Supporters of the singer-reality star pointed out his discography including tracks like “Wait a Minute” with Lil Kim, “Another Day in Paradise” with his sister Brandy, “Sexy Can I” featuring Young Berg also known as Hitmaka, “Famous” with Chris Brown, and “Tie Me Down” with the New Boyz. Some have suggested Ray J battle against artists like Fabolous or Chris Brown, but not everyone was on board. If Ray J did participate in a Verzuz battle, who do you think he should go up against?

Ray J wants to do an IG live battle, and I say let 'em. He can play "Wait A Minute" and clear the place out.

The world deserves a Ray J versus Fabolous battle 😭

Still laughing that Ray J said he wanted in the producer/DJ battle. What a fuckin’ clown. How about you stick to slanging those jank EarPods or whatever the hell he is doing now…

Exactly who does Ray J think he gonna battle? And win?

The real battle is Ray J vs Chris Brown https://t.co/hdFF79KBtY