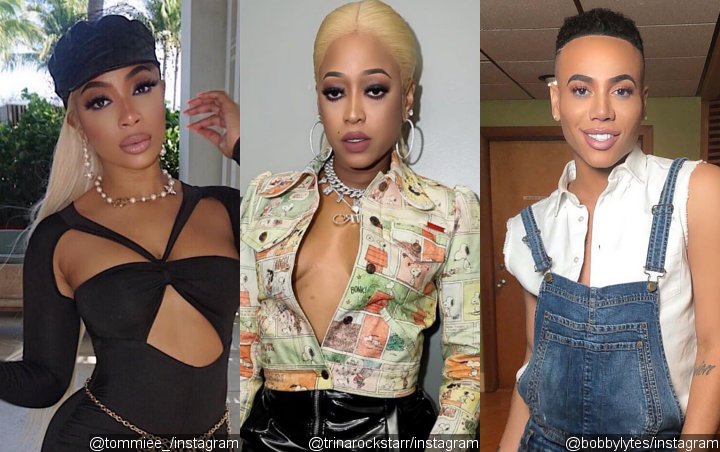 The moment was caught on tape, but Bobby Lytes won’t confirm who actually made the comments.

When keeping it real on Instagram Live goes wrong. Celebrities were enjoying their New Year’s Eve parties all around the globe with their loved ones, and unsurprisingly, they took to social media so their followers could partake in the festivities. Live-streaming famous figures seemed to be celebrating without a hitch, however, Trina is accused of apparently having an Instagram Live moment that landed her in hot water with Tommie Lee.

The rapper’s cousin, Bobby Lytes, was on Instagram Live with the camera positioned to face him only. Off-camera were others engaged in a random conversation. Then, one person can be heard discussing former Love & Hip Hop reality star Tommie Lee’s risqué social media photos. It’s clear that one of the guests was unaware that Bobby was recording.

“Tommie, she always got her p*ssy out,” the person who was said to be Trina comments off-camera. Bobby looks worried and tries to change the subject by saying something about South Beach. The person continued, “Imagine if I posted some pictures like that,” “Her p*ssy was out!,” and “The pictures are cute, but it was like ‘Huh?'” It didn’t take long for Tommie to be notified about the comments and she had a few subliminal responses of her own.

Tommie shared a clip of herself getting her makeup done while she mimicked the “p*ssy” remarks. In the caption, she wrote, “Politics! @msamyj on the Beat tho! Y’all remember we have 365 to At least try to be on some New sh*t#Evolve.” Later, it looked as if Tommie caught up with Bobby at Diddy’s party and she wasn’t happy—that ear grab was serious. Watch the clips below.

Politics! @msamyj on the Beat tho! Y’all remember we have 365 to At least try to be on some New shit#Evolve

#PressPlay: #BobbyLytes talks about his live video where #Tommie was brought up in the background and said the person who said it, is not who everyone is suspecting. He also reassured that he and Tommie are good. (Swipe for earlier posts)