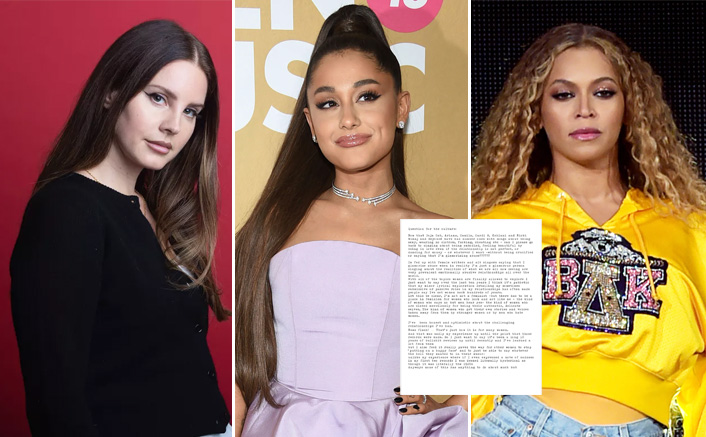 Smells like Karen in here. Lana Del Rey is under fire for from multiple fan bases after a post where she thought it’d be a good idea to shade Nicki Minaj, Beyoncé, Doja Cat, Ariana Grande, and Cardi B.

Lana Del Rey’s publicist has to be shaking in her boots right now. The talented recording artist announced her new album and, in doing so, she dragged a whole bunch of other female stars that have hustled for years to make it.

Fans are calling for Lana Del Rey to delete her latest message, which has been deemed unnecessarily shady. The underlying theme of the post is about her own music and how, for years, she has been criticized for her lyrical content. People have shaded Lana for “glamorizing abuse” and apparently she doesn’t think that the industry has been fair to her. She wrote the following:

“Question for the culture: Now that Doja Cat, Ariana, Camila, Cardi B, Kehlani and Nicki Minaj and Beyoncé have had number ones with songs about being sexy, wearing no clothes, fucking, cheating etc – Can I please go back to singing about being embodied, feeling beautiful by being in love even if the relationship is not perfect, or dancing for money – or whatever I want – without being crucified or saying that I’m glamorizing abuse?”

Defending her own music, Lana Del Rey has been criticized heavily for the post. Fans are accusing her of putting down other women in a bid to get her point across and, all morning, she has been trending on Twitter as people share their opinions.

She’s definitely going to need to address this further. We’ll keep you posted. In the meantime, new Lana Del Rey album out on September 5…if you were looking for a tranquilizer.

Not @ Lana Del Ray trying to come for Black women like Beyoncé, Nicki Minaj, Meg Thee Stallion, Cardi B & Doja Cat because their music is doing better than hers on the charts & trying to say their music lacks “substance”. But Lana sung about her pussy tasting like “Pepsi Cola”. pic.twitter.com/hiMjXMytvD

lana del ray could've made her point without dragging all those other women pic.twitter.com/Ay8bYWlmhN

look at how quickly this dude GATHERED lana del ray.. LOVE TO SEE IT pic.twitter.com/5hSzKQGhWH

lana del ray had a whole song with the lyrics “my pussy taste like pepsi cola” but she’s attacking black women for having #1 hits about sex also? does that make sense?

i cant believe lana del ray came for WOC & their music like she didn’t have a bunch of white girls in flower crowns screaming about pepsi cola flavored pussy. ok white woman