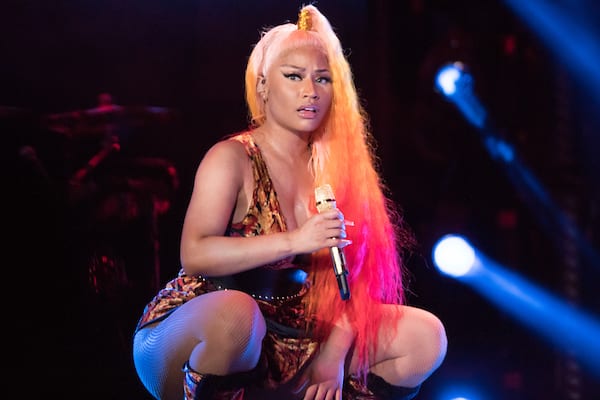 For someone who’s always accusing others of unoriginality or challenging their writing, Nicki Minaj sure finds herself in these types of situations a little too often.

Prepare for the “Barbs” to have another aneurysm, because someone new is out here making claims against Nicki Minaj. The rapper found herself in quite a bit of controversy over the last week (which generally happens when she’s releasing new music) as she got into a Twitter war with her ex Meek Mill and also saw quite a bit of backlash when her new single “Yikes,” featured what many thought were questionable lyrics about civil rights activist and icon Rosa Parks.

Well, ‘Yikes’ was clearly an appropriate title because “YIKES!” there’s even more controversy surrounding the song. A rapper by the name of HBK Ray has taken to social media to call out Minaj for allegedly stealing not only his flow and beat from his 2019 track “Talk Polite,” with ridiculously similar lyrics, but even a similar cover art featuring a red Ferrari, for her “Yikes” single.

“The industry is filthy! Taking ideas from small artists who trying to eat and share their vision to the world for your own good knowing you on already and not give credit or open the door for them is weak as f*ck!” the rapper fired off at Minaj via Instagram stories while sharing messages from many others pointing on the similarity in the songs. Ray even suggests that Minaj may have a ghostwriter who is stealing these ideas as it’s beginning to happen quite often.

Many may remember a similar situation a couple months back around the “Chun-Li” rapper’s other most recent release “Welcome to the Party” with Pop Smoke where a Philly rapper by the name of Muff also pointed out that Minaj’s verse had insanely similar lyrics and style to an older verse of her own. Take a look at the receipts below. What do you think of all of this? Is Minaj really out here biting from these underground artists?

🚨🚨🚨🚨🚨🚨🚨🚨🚨🚨🚨 I NEED EVERYONE TO TAG @theshaderoom, @akadmiks, @balleralert! This shit is not valid for us up & coming artists who go hard & put in time to give the world our vision and get it all stolen from bigger artists who have the spotlight already and choose to capitalize off of us. Shit outta line and has to STOP! EVERYONE TAG @theshaderoom @akadmiks @balleralert‼️‼️‼️‼️‼️

A Philly rapper who goes by the name of Muff is suggesting that Nicki Minaj may have ripped her off for her latest remix. Prepare for the “Barbs” to have another aneurysm, because someone new is out here making claims against Nicki Minaj. You may or may not have heard Nicki’s remix to the Pop Smoke record “Welcome to the Party.” While the song is refreshing compared to what we’ve heard from Minaj as a late, one Philly born rapper believes it isn’t refreshing at all, as she feels Minaj may have bitten off one of her flows for the verse. Female rapper Muff, took to Instagram to compare her original video to Nicki’s newly released verse. In her video which was originally posted on July 1st, she spits “I like sidity b*tches, who be wit the business, when they know they be giving out smoke. Don’t even gotta tell ’em, When I link the b*tch, she already on go,” while Nicki in the newly released remix spits in a very similar flow “all my pretty bitches, high-saditty bitches, got a milli’ b*tches on go, All these silly b*tches, I’ma kill these b*tches, Yo Pop, who the f*ck want smoke?” Regardless of the circumstances Muff remained pretty respectful in her comparison post as she addressed the matter, simply captioning it “recorded this sh*t at the end of June and posted on July 1st, but I’m not even about to be hype. Thanks for peeping me, I’m still a fan. Repost/Tag if you think this sh*t is fishy.” She later responded to a comment echoing those same sentiments as she clarified she doesn’t have any beef with Nicki but she does feel it’s her right to address the matter, saying “I don’t dislike Nicki, but I’ma rant just like she would over something she feels strongly about.” Take a listen to the comparisons in the FULL story at www.itsKenBarbie.com or SWIPE and let us know what you think. Did Nicki bite Muff or is she reaching? It’ll be interesting to see if the rather vocal Minaj will address this as she has everything else the last few weeks or if Muff will simply be left fighting of Minaj’s legion of “barbs.” #nicki #minaj #nickiminaj #barbs #barbz #muff #welcometotheparty #girlwhat #queen