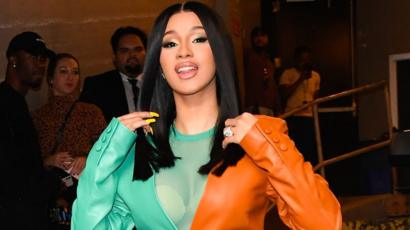 Big Bardi on the way.

It’s common knowledge that Cardi B is prepping a new album for 2020. After her wildly-successful debut, Invasion of Privacy, everyone is waiting on her next move and wondering which direction her music will take. She has provided us with some hints so far about what to expect. While appearing in Vogue’s “73 Questions” video segment, she described her forthcoming project as “spicy” and “controversial.” The “controversial” aspect might stem from her also sharing that she plans on ignoring musical trends and pursuing her own vision, despite the pressures of being a mainstream artist. In an interview with Billboard, she said, “I cannot just go with what’s hot. I still gotta go with what I want to do.”

While Cardi has referenced her new music, the information she has provided us with has been rather vague. One of her fans had enough with living in the unknown so she pulled on Cardi via Twitter asking her to “spill some tea on the single.” Surprisingly, Cardi conceded. She shared a mere three-second snippet of the song, but it featured the glorious producer tag, “Wheezy Outta Here!” Wheezy is predominantly admired for his work with Young Thug and Gunna. However, this will be his first time collaborating with Cardi and we’re excited to see how it will turn out.

Take a listen to the snippet along with many of the reactions from extremely excited fans below. Are you excited?

girl I want it now! pic.twitter.com/HJFsnF8EzO

Yesssss, gimme something I can Twerk to Bardi 👏🏼😝😝 pic.twitter.com/jZx2uF6EN4

OMG SOUNDS LIKE A BOP…YOU’RE SUCH A TEASE 🥴 can’t wait for your new album!! #CardiIsComing 🔥 pic.twitter.com/J8Hu4EbOgt

“Shake, earthquake” if y’all hear me yelling this out, mind ya business!! @iamcardib pic.twitter.com/QqJ5ndcdr8

You got us out here starving… feed me some new gym music MAMAAAA pic.twitter.com/yoc6pU9tP1