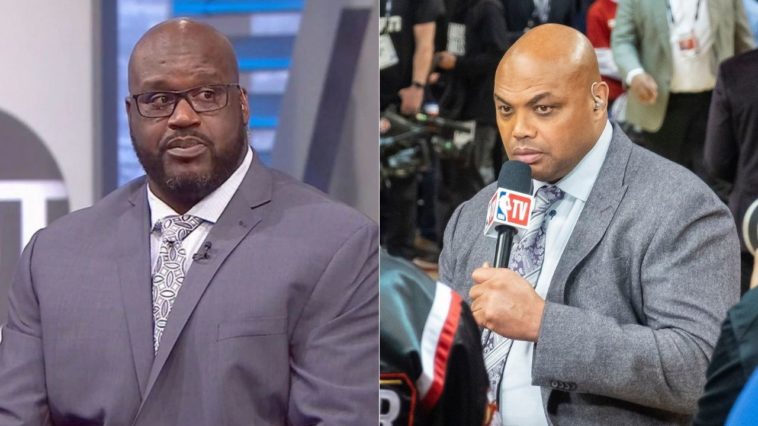 The NBA Hall of Famers were quickly met with backlash after they put on their tap dancing shoes and expressed their poorly informed thoughts on Taylor’s case.

During TNT’s Inside the NBA, Charles Barkley gave his thoughts on the Breonna Taylor case and defended the Louisville police. The basketball legend and NBA analyst insisted that the shooting of Breonna Taylor shouldn’t be grouped in with the likes of George Floyd and Ahmaud Arbery.

Some of the network’s most prominent Black personalities expressed outrage toward the decision from Kentucky’s grand jury decision to only charge one Louisville police officer with “wanton endangerment.” The NBA Hall of Famer expressed a different view.

“I don’t think this one was like George Floyd or Ahmaud Arbery and things like that,” Barkley said. “I just feel bad that the young lady lost her life. But we do have to take into account that her boyfriend shot at the cops and shot a cop. So like I say, even though I am really sorry she lost her life, I just don’t think we can put this in the same situation as George Floyd or Ahmaud Arbery.”

Adding to this, Barkley also gave his thoughts on the nationwide movement to defund the police.

“I hear these fools on TV talking about defund the police and things like that,” Barkley said. “I’m like, wait a minute, who are black people supposed to call? Ghostbusters? When we have crime in our neighborhoods?”

Fellow Hall of Famer, Shaquille O’Neal, defended Charles Barkley’s opinion. O’Neal, also a deputy sheriff in Georgia and Florida, felt that the warrant also separated Taylor’s case. “I have to agree with Charles, this one is sort of lumped in,” O’Neal said. “You have to get a warrant signed and some states do allow no-knock warrants. And everyone was asking for murder charges. When you talk about murder, you have to show intent. A homicide occurred and we’re sorry a homicide occurred. When you have a warrant signed by the judge, you are doing your job, and I would imagine that you would fire back.”

All of these opinions were expressed before the start of Game 4 of the Western Conference Finals, with a score of 114-108, the Los Angeles Lakers defeated the Denver Nuggets. After the game, LeBron James gave a quick statement on the case.

“I don’t want to get into the case and things of that nature, but we lost a beautiful woman in Breonna … we want justice no matter how long it takes, even though it’s been so many days, so many hours, so many minutes for her family, for her community,” he said. ” … Our hearts are with that family and with that city. There’s just so much injustice going on.”

Charles Barkley says you can't put the Breonna Taylor case in the same situation as George Floyd, Ahmaud Arbery because her boyfriend shot at the police pic.twitter.com/8dMjVMZp39

"We need to stop the defund or abolish the police crap."

No, #charlesbarkley, he shot at intruders. These intruders, who happened to be Police, did not identify themselves. He had every right to defend himself and Breonna against whoever was breaking into his house unannounced.

Charles don't be stupid. "Defunding" the police doesn't mean abolishing the police it means reestablishing retraining and reorganizing the police that better "serve" their cultures and communities.There responsibility is2 serve. If you aren't sure about a topic don't speak on it.

@NBAonTNT Why does Charles Barkley and Shaq not know all the details pertaining to the Breonna Taylor case but think that they can freely discuss it without actual facts? Horrible.

Fuck Charles Barkley, Ernie, @SHAQ, & Kenny. They’re completely wrong about Breonna Taylor her death is in the same category. She was sleeping in her bed then her dreams became a nightmare. Can you imagine her last moments as she died alone? She deserves justice. Her life matters https://t.co/EAsHhrTjBU

I wonder if Shaq/Charles Barkley’s tone would be different if Breonna Taylor was their daughter . Like y’all need to read the room when it comes to us regular degular black folks. That money be makin mafuckas forget . I would never .

Charles Barkley and Shaq are wrong on their analysis of #BreonnaTaylor murder.
They are justifying her death.

When they say all skin folk ain't kinfolk, this is on another level.

You have to be human to understand this murder was wrong on all accounts.