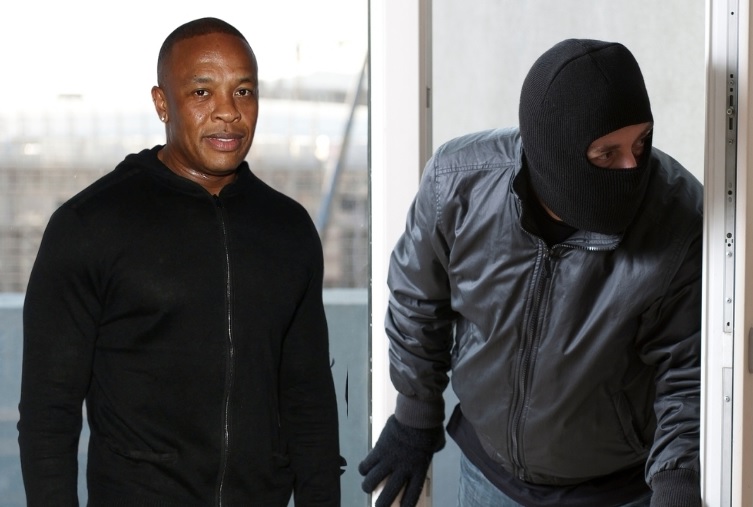 Chile, if it isn’t one thing it’s another. Let me find out Dre’s wife sicked some goons to steal his precious things when he could’ve been fighting for his life.

Hip Hop was at a standstill hours ago after news circulated that Dr. Dre had suffered a brain aneurysm. The 55-year-old music legend had recently made headlines over his bitter divorce from wife Nicole Young after 25 years of marriage, but his health superseded those updates as fans worldwide came together to wish the Aftermath icon well. Several of Dre’s friends, collaborators, and fellow celebrities took to social media to share kind thoughts about Dr. Dre including Ice Cube, 50 Cent, Magic Johnson, Russell Wilson, Ebro Darden, T.I., YG, Ciara, Quincy Jones, and Isaiah Thomas.

After LL Cool J shared a tweet saying that Dre was “recovering nicely,” the megaproducer surfaced on his Instagram with a positive update about his recovery. “Thanks to my family, friends and fans for their interest and well wishes,” Dr. Dre penned in a caption to a photo of himself in the studio. “I’m doing great and getting excellent care from my medical team. I will be out of the hospital and back home soon. Shout out to all the great medical professionals at Cedars. One Love!!” Still, the last thing that the Compton icon needs is added stress at this time, but that’s exactly what’s coming his way.

According to a report by TMZ, which was the first to report on Dr. Dre suffering a brain aneurysm, the rap producer’s home in Pacific Palisades was targeted by burglars who heard that the star has been hospitalized. Four men were spotted on the premises by security as they were casing the house at approximately 2 AM. Before they could get inside the main living area, security had called the police and confronted them. The men reportedly fled, but the cops found them and arrested them.

The publication notes that law enforcement is under the impression that the would-be burglars saw the numerous articles about Dr. Dre’s health and decided that it was the most opportune time to hit a lick off the producer.