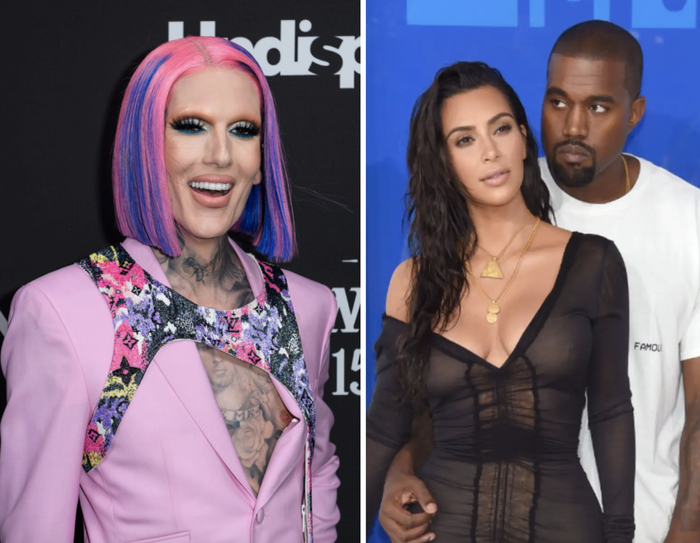 After egging on the attention initially, he who shall not be named finally puts the scandal to rest from his end.

On Thursday, Jeffree Star finally took to his main platform, YouTube, to shut down the rumors that have been circulating about him and Kanye West since early this week. In a very casual video of filmed in his home and of course used for monetization purposes, Star sits in a pink robe at his kitchen table in front of his computer, going over the details of the alleged scandal between him and West. He says that people “have too much time on [their] hands”, and that the original rumor, which started on Tik Tok, was completely fabricated for views.

In the video, Star declares, “I’m single. I’m not sleeping with anyone. I like very tall men. Me and Kanye have never hung out, and this whole thing is really funny.” He added, “How would that even be made up? Because we both live in the same state?”

Jeffree Star also addressed the real reason why he moved to Casper, Wyoming from California, which many people speculated was because of Kanye. Star says he will still be living in California for half the year to support his business, Jeffree Star Cosmetics. He says he loves Wyoming because of the views, the quiet lifestyle, and the fact that it is the least populated state in the USA. He also says he is opening up some more businesses in Wyoming, which is part of the reason why he moved.

The beauty mogul continues the YouTube video by moving on from Kanye rumors and showing fans how he is having his expensive vehicles shipped from his California home to his new garage in Wyoming.

Jeffree has jokingly responded to tweets about the situation all morning on Friday, quote-tweeting a meme about him from the movie White Chicks, saying, “I just opened my eyes and it’s too early for this shit.” Take a look at the video as well as some of the tweets below. Thoughts?

I just opened my eyes and it’s too early for this shit 😂😂 https://t.co/iRDZosfhdc